A claim that would have traditionally taken adjuster Brian Fick over a week to adjust was completed in just three hours thanks to FMH Precision Solutions. 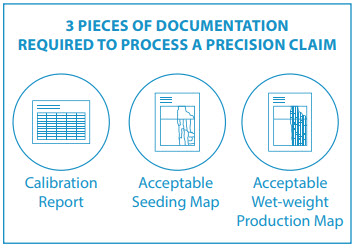 A claim that would have traditionally taken adjuster Brian Fick over a week to adjust was completed in just three hours thanks to FMH Precision Solutions. Just after harvest 2017, Fick worked on a RAMP claim for an insured who farms across four counties in three states: Minnesota, Iowa, and South Dakota. The farming operation is also tied to three other insureds. “All the information for the claim was reported using precision, so I knew going in what I needed to ask the farmer to provide,” said Fick. “I just needed planting reports, proof of combine calibration data, and pixelated yield records with wet yield data available.”

Fick had worked claims for this farm in the past and knew just how much work goes into processing a claim with traditional methods.

“In the previous year’s claim, I had to ask the insured to stop movement of grain from their storage facilities so I could measure around 33 bins in different locations, ask for grain assembly sheets and make sure all were correctly split, bring all this grain data back to office and sort through it like solving a puzzle, and prorate this grain inventory to his existing yield maps from the combine,” he said.

“All of this could take over a week to accomplish. I required about a day or two to measure and then sometimes a week to get all of the assembly sheets together,” he added. “Then another two to three days to sort through data. Sometimes I would find out that some assembly sheets were not sent, and that would cause more delays in processing the claim.”

But this year was different. This year, Fick was able to process the loss as a Precision Claim.

Fick did run into some hesitation from the insured but was able to answer his questions and seek assistance from FMH’s Precision and Mapping team to ensure a smooth claim process.

“The farmer was a little skeptical at first. He was concerned that sometimes not all his planting data gets recorded right or might not be exactly how we would like it,” he said. “FMH was able to help fix those fields. I think that the insured liked not having to gather assembly sheet data from multiple elevators.”

Fick is one of over 200 FMH adjusters trained in processing Precision Claims. He noted that the benefits of Precision Claims go beyond the insured and improve the adjuster’s processes, too.

“From my point of view, the insureds are finally insuring the right acres for what they planted. They are paying premium only on what is planted, and not what the FSA says is out there,” he said. “From a safety perspective, I like the idea of not having to climb up bins and worry about falling.

This technology matches what our insureds are already used to working with in their planters and combines, so it is not hard for new insureds to transition to it.”

Read more on the Precision Ag Blog!
Ready To Get Started?

Provide your information to learn more and we will contact you within 72 hours.