Larry Ewart, Senior Vice President and National Claims Manager, will be retiring at the end of 2018. 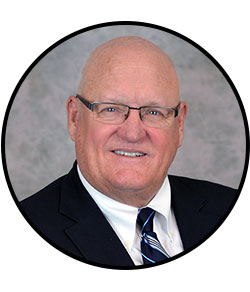 Larry Ewart, Senior Vice President and National Claims Manager, will be retiring at the end of 2018. Larry is a Kansas native, born in Wichita, KS, and raised in Augusta, KS. He attended Augusta High School and earned his bachelor’s degree at Southwestern College. Larry taught and coached from 1974 through 1978 at Ingalls High School and Smith Center High School in Kansas. While teaching, Larry began his career in crop insurance on a part-time basis when he joined Wheat Growers Mutual Hail Insurance Company out of Cimarron, KS in 1974 as a per-diem adjuster. In 1978, he joined Wheat Growers full time as a Field Representative. When Wheat Growers merged with FMH in 1994, Larry continued his career in the crop insurance industry. Larry served a total of 16 years with Wheat Growers and has spent the last 24 with FMH for a total of 40 years of service.

Larry has championed innovation at FMH over the years, especially during the last half dozen where he led the transformation of claims operations at FMH. He has not only done an outstanding job for the company, but he has been an advocate for the industry as a long-time, active member of several NCIS committees – including serving as chairman on several committees.

Larry said, “The highlight of my career was being involved with the acquisition with John Deere. It’s very gratifying to me that it was successful.” But aside from career highlights, Larry will miss the relationships and day-to-day interactions the most.

During retirement Larry and his wife of nearly 45 years, Anita, plan to spend time with their family (children Van Ewart and Dee Woods are FMH agents through Millard Management in Kansas), attend their granddaughters’ activities, cheer on the Kansas Jayhawks at basketball and football games, travel to visit friends, and hit the golf course from time to time.

Farmers Mutual Hail thanks Larry for his 40 years of service and wishes him the best in retirement!

My favorite part of my job, and what I will miss the most, are the relationships and day-to-day interactions.