As the Senate considered its version of the farm bill on the floor last week, several attempts were made to add amendments that would be harmful to the crop insurance program... 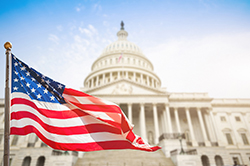 As the Senate considered its version of the farm bill on the floor last week, several attempts were made to add amendments that would be harmful to the crop insurance program.

The Crop Insurance and Reinsurance Bureau (CIRB) sent out action alerts to its grassroots coalition and included necessary tools and resources to reach out to the Senate and fight these amendments. Farmers Mutual Hail forwarded this action alert onto its agents and employees shortly after receiving the CIRB alert. In total, 673 letters were sent to 67 Senators from the CIRB membership.

Ultimately, there were no votes on harmful crop insurance amendments, including Durbin-Grassley Amendment #3103, which would have imposed an AGI limit on crop insurance. Below is a joint statement from crop insurance organization on the Senate farm bill's passage:

‘America’s farmers and ranchers scored a major victory today when the United States Senate passed a bipartisan farm bill that maintained the nation’s strong crop insurance infrastructure. For more than a year, producers across the country have called crop insurance a top priority and urged lawmakers to do no harm to crop insurance. We applaud the Senate for heeding famers’ calls and approving a bill that continues to make crop insurance affordable, available and economically viable.

We also commend the Senate for rebuffing amendments that would have limited participation in crop insurance and affected farmers of all sizes who rely on crop insurance when disaster strikes. We look forward to working with Chairman Roberts and Ranking Member Stabenow and their counterparts in the House to ensure there is a strong crop insurance title in the farm bill conference report. We are pleased to see that the Senate is committed to providing long-term certainty for our producers who count on crop insurance as their number one risk management tool.’”

Thank you to all who showed up in support of crop insurance. Your outreach to the Senate made a difference.