In mid-August a derecho windstorm swept through the Midwest causing significant damage to property and commodities in several states. The storm’s hurricane-force wind speeds, ranging from 80 to 120 miles per hour, covered a 700-mile path from eastern Nebraska over central Iowa, to parts of Illinois, Wisconsin, Indiana, and Michigan.

The damaging winds flattened wide swaths of cropland, crushed grain bins, and caused significant home and property damage. With such a large storm path, many FMH insureds and agents were affected from this devastating wind event.

“The derecho was a one in 500 event for a lot of companies, and even a one in 1000 event for some, making it the worst-case scenario in the span of a century,” said FMH President & CEO Ron Rutledge. 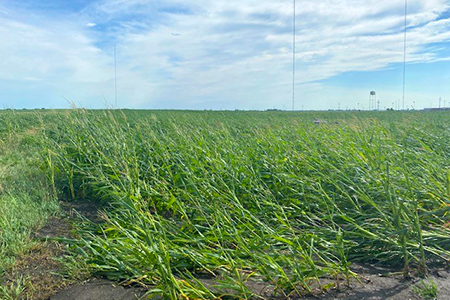 This multi-state storm spurred claims for all three areas of FMH business including its Crop, Property & Casualty (P&C), and Reinsurance Divisions.

The biggest question he has received with derecho crop claims is if crops are considered “mechanically able to harvest”, which is something determined by the individual insurance provider.

To date, approximately 7 percent of the FMH producers with reported losses in the impacted counties have part of a field or fields that meet the standard of unable to mechanically harvest. FMH continues to work with its producers to let them know what their options are when it comes to crop losses. As always, service has been a top priority these past months and FMH crop adjusters continue to aim for fairness and thorough explanations when settling a claim.

On the property and casualty side, FMH’s P&C Division reports over 1,000 claims from the storm amounting to over a $23 million loss. Even with the influx of claims, FMH claims service continues to shine. Pat Faga, FMH Executive Vice President & Chief Marketing Officer, reported, “The P&C claims team has done an outstanding job providing excellent service to both our insureds and agent partners by leading our industry’s response to this intense storm.”

He also noted how FMH field adjusters were once again the first out in the field and that agent feedback confirmed FMH has also been the industry leader in getting claims payments in insureds’ hands.

As for FMH’s Reinsurance Division, two of its client companies were severely hit with over 3,200 claims reported. The Reinsurance team has been heavily involved in helping line up catastrophe adjusting crews and advancing funds so that these companies could adjust and pay their losses in a timely manner.

“It’s been a tough year, no doubt about it, but a year like this is why people buy insurance. This is also an opportunity to remind people just how important insurance is and how much better FMH service is than the competition,” said Ron Rutledge .