This year's planting season is ahead of schedule according to the most recent USDA Crop Progress report. 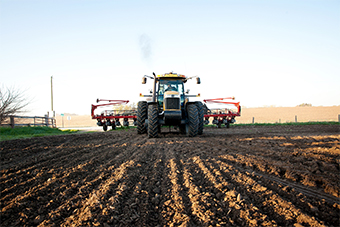 This year’s planting season is ahead of schedule according to the most recent USDA Crop Progress report.

Farmers in the 18 top-producing corn states have planted 85 percent in the ground as of mid-May. This is significantly higher from the 71 percent that was planted at the same time last year. Of the 85 percent that is planted, 56 percent has emerged, which is also up from last year’s 32 percent.

Of these 18 states, North Dakota is the most ahead of schedule with 70 percent planted compared to just 15 percent at this same time in 2014. Of that, 12 percent has emerged, compared to zero percent last year.

This year’s average percentage of soybeans planted in the 18 top-producing soybean states is also ahead – 45 percent has been planted compared to 31 percent last year at this time.

Minnesota is in the lead with 79 percent of soybeans planted. This is 56 percent ahead of last year at this time. Nationally, of the 45 percent planted, 13 percent has already emerged so far, compared to only 8 percent at this time last year.

The state of Iowa is also well ahead of last year with planting both corn and soybeans. Iowa Secretary of Agriculture Bill Northey said that “conditions were nearly ideal in much of the state...farmers were able to make tremendous progress.”